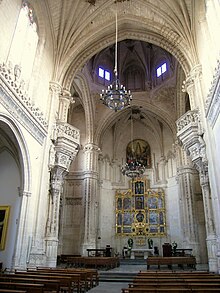 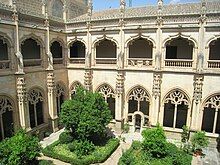 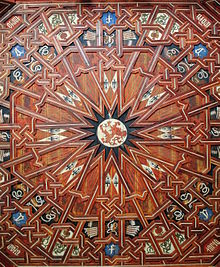 The Monasterio de San Juan de los Reyes (English: Monastery of Saint John of the Kings) is a historic monastery in Toledo, Spain, built by the Catholic Monarchs (1477–1504).

This monastery was founded by King Ferdinand II of Aragon and Queen Isabella I of Castile to commemorate both the birth of their son, Prince John, and their victory at the Battle of Toro (1476) over the army of Afonso V of Portugal.

Undoubtedly, the battle represented a decisive political victory[12][13] for the Catholic Monarchs, assuring them the throne and paving the way for the future united kingdoms of Spain. As summarized by the Spanish academic historian Rafael Casas:

“…San Juan de los Reyes resulted from the royal will to build a monastery to commemorate the victory in a battle with an uncertain outcome but decisive, the one fought in Toro in 1476, which consolidated the union of the two most important Peninsular Kingdoms.”[14]

Toledo was chosen as the site for building the monastery due to its central geographic location and because it had been the capital of the ancient Visigoth kingdom, symbolically reconstituted by Isabella and Ferdinand with the restoration of the lost unity of Spain, through the union of Castile with Aragon.[14]

This monastery was initially named “San Juan de la Reyna”[15] and was conceived to be the mausoleum[16] of the Catholic Monarchs. They would change their plans later, choosing Granada as their burial place, after its reconquest in 1492.[16]

The monastery’s construction began in 1477 following plans drawn by architect Juan Guas, and was completed in 1504. It was dedicated to Saint John the Evangelist for use by Franciscan friars. In 1809 the monastery was badly damaged by Napoleon‘s troops during their occupation of Toledo, and abandoned in 1835. Restoration began in 1883 but was not completed until 1967. The monastery was restored to the Franciscan order in 1954. 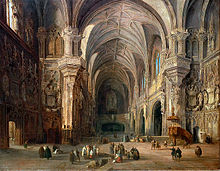 The monastery is an example of Gothic style with Spanish and Flemish influences. Its church is in the form of a Latin cross, with short arms, an elongated nave (approximately 50 metres in length, and 30 metres high), and side chapels situated between the domed arches – three chapels on either side of the nave, and two more under the choir. The church is notable for its decoration of the coats of arms of the Catholic Monarchs held by eagles. Its chancel is decorated with an altar (mid-16th century) from the former Santa Cruz Hospital by sculptor Felipe Bigarny and painter Francisco de Comontes, depicting scenes from the Passion and the Resurrection, as well as two scenes of the Santa Cruz legend.

Its cloister has a small garden. The ground floor’s ceiling is formed of German cross vaults set with figures of saints interspersed with animal and plant motifs, all created by the Toledo sculptor Cecilio Béjar in the 20th century. Its upper cloisters, first completed in 1526 and restored in the 19th century, contain Mudéjar ornamentation, including a ceiling of larch wood, painted with the motifs and coats of arms of the Catholic Monarchs, and the motto Tanto monta, monta tanto. The monastery building is traditionally said to have been commissioned by Queen Isabel and King Ferdinand II to commemorate their victory over the Portuguese-Castilian forces of Afonso V and Prince John at the Battle of Toro in 1476.[17] To symbolize the victory of the Christians in the years-long Granada campaign, its granite exterior facade is festooned, as per the Queen’s order of 1494, with the manacles and shackles worn by Christian prisoners from Granada held by the Moors and released during the Reconquista.[18]

View of the El Greco Museum in Toledo, Spain.

The El Greco Museum (in Spanish: Museo del Greco[1]) is located in Toledo, Spain. It celebrates the mannerist painter El Greco (Domenikos Theotokopoulos, 1541–1614), who spent much of his life in Toledo, having been born in Fodele, Crete.

The museum opened in 1911 and is located in the Jewish Quarter of Toledo.[2] It consists of two buildings, a 16th-century house with a courtyard and an early 20th century building forming the museum, together with a garden. The house recreates the home of El Greco, which no longer exists. The museum houses many artworks by El Greco, especially from his late period.[3] There are also paintings by other 17th-century Spanish artists, as well as furniture from the period and pottery from Talavera de la Reina in the Province of Toledo. 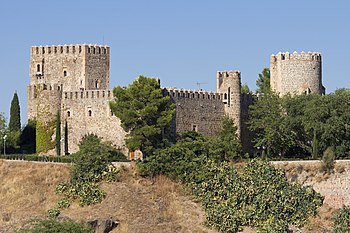 The Castillo de San Servando is a medieval castle in Toledo, Spain, next the Tagus River. It was begun as a monastery, occupied first by monks and later by the Knights Templar.

In 1874 the castle was named a national monument.

Evidence exists of an ancient monastery attached to a basilica of the same name, possibly founded in the 7th century. In 1080 Cardinal Richard of St. Victor, a monk of the ancient Abbey of St. Victor in Marseille, was sent as the legate of Pope Gregory VII to the Council of Burgos held that year. One of his mandates was to ensure the adoption of the Roman Rite, replacing the ancient Mozarabic Rite used by the Christians of Iberia for centuries. He carried specific instructions for the restoration of San Servando and its adoption of Roman liturgical practice.[1]

After surviving for several centuries under Muslim rule, when the city was conquered by the Christian army of King Alfonso VI of Castile in 1085, both he and his wife, Constance of Burgundy, became generous benefactors of the basilica and rebuilt the monastery.[1] According to John Ormsby, the English translator of “Don Quixote” by Miguel de Cervantes Saavedra, Alfonso VI called the castle “San Servando” after a Spanish martyr, a name subsequently modified into San Servan (in which form it appears in the “Poem of the Cid”), San Servantes, and San Cervantes. Mr. Ormsby mentions that “there is a complete history of the Cervantes family from the tenth century down to the seventeenth extant under the title “Illustrious Ancestry, Glorious Deeds, and Noble Posterity of the Famous Nuino Alfonso, Alcaide of Toledo,” written in 1648 Rodrigo Mendez Silva.” On the of the side of the mountain, near the Castle, a poem by Miguel de Cervantes was enshrined in 2005, four hundred years after Miguel de Cervantes wrote it. The picture of the poem is a http://www.panoramio.com/photo/15750564

On 11 March 1088 the king offered the monastery to the Holy See on the condition that it be permanently administered by the Abbey of St. Victor, along with all its goods and benefits. This arrangement was approved by Pope Urban II, who was elected the day after the documents for the donation were drawn up, on 20 February 1089. He entrusted the task to Cardinal Richard, by then himself Abbot of St. Victor. After that point, the monastery came under the authority of the Abbey of St. Victor and French monks began to occupy the Spanish monastery, introducing the Rule of St. Benedict.[1]

King Alfonso saw the monastery as a bulwark of Christian presence in the region, and on 13 February 1099, made a donation of the Church of Santa María de Alficén, and of the community surrounding it, which was a traditional Mozarabic territory. He gave the monastery the objective of maintaining this identity among the populace. He further founded a monastery of Benedictinenuns to be attached to the church. Both monastic communities were charged with providing care and hospitality to the poor of the region and to travelers.[1]

The monastery was destroyed by Saracen attacks in 1110, and the monks returned to Marseille. It was at this point that the Monastery of San Servando entered a new phase of its existence, as it became the possession of the Archbishop of Toledo and the cathedral chapter.[1]

King Alfonso VIII gave the monastery to the Knights Templar, who converted the monastery into a fortress in order to protect the Puente de Alcántara against a possible Muslim attack. With the disappearance of the Muslim threat and the dissolution of the Templars in 1312, the fortress lost its importance and was neglected. Today tours of the castle are conducted about the alleged haunting of the site by a miscreant knight, Don Nuño Alvear, who supposedly died after being shown his many victims in a vision.[2]

The fortress was depicted in El Greco‘s noted landscape work, View of Toledo.

It is currently used as a youth hostel.