Muezza (or Muʿizza) (Arabic: معزة‎) is said to have been the Islamic prophet Muhammad‘s favorite cat.[1][2]

It is told that Muhammad awoke one day to the sounds of the Adhan, the Muslim daily call to prayer. Preparing to attend, he began to dress himself; however, he soon discovered his cat Muezza sleeping on the sleeve of his prayer robe. Rather than wake her, he used a pair of scissors to cut the sleeve off, leaving the cat undisturbed. When he returned from the mosque, Muhammad received a bow from Muezza in gratitude. He then stroked his beloved cat three times.[1][2]

History books also record that the Sufi leader Ahmed ar-Rifa’i cut his sleeve because a cat was sleeping on it, then stitched it up later and said “nothing changed”.[3]

However, Muhammad in other hadiths commanded that animals be treated kindly, giving the example of a man who goes to heaven for getting water from a well for a thirsty dog,[4]and another woman who goes to hell because she kept a cat locked up, not feeding it, nor allowing it to forage for its own sustenance.[5]

Additionally, a UK-based pet food company, Halal Pet Products Ltd, produces what they claim to be a completely halal cat food, which they named Muezza Pure.[6] The company justifies their development of the product by asserting that, while there are no laws in Islam prohibiting animals from eating haram foods, Muslims are forbidden to handle or feed haram foods, such as pork and carrion, to animals.[6]

The domestic cat is a revered animal in Islam.[1] Admired for its cleanliness as well as for being loved by the prophet Muhammad, the cat is considered “the quintessential pet” by Muslims.[2]

Cats have been venerated in the Near East since antiquity, a tradition adopted by Islam, albeit in a much modified form.[3] Muhammad is reported to have said that “a love of cats is an aspect of faith”; according to other hadiths, he prohibited the persecution and killing of cats. The prophet purportedly allowed a cat to give birth on his cloak, and cut off the sleeve of his prayer robe rather than wake his favourite cat, a female named Muezza, who was sleeping on it.[2] This fits in with the theme of compassion in Islam. 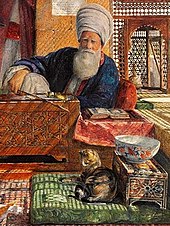 Cat resting on a pillow next to an imam in Cairo, by John Frederick Lewis

One of Muhammad’s companions was known as Abu Hurairah (literally: “Father of the Kitten”) for his attachment to cats.[1] Abu Hurairah claimed that he had heard the Prophet declare that a woman went to Hell for starving a female kitten and not providing her with any water, but this was disputed by the Prophet’s widow Aisha.[4] According to legend, Abu Hurairah’s cat saved Muhammad from a snake.[2] The grateful prophet stroked the cat’s back and forehead, thus blessing all cats with the righting reflex. The stripes some cats have on their foreheads are believed to mark the touch of Muhammad’s fingers.[5] However, many Muslims do not believe all hadith are 100% accurate.

The American poet and travel author Bayard Taylor (1825-1878) was astonished when he discovered a Syrian hospital where cats roamed freely. The institution, in which domestic felines were sheltered and nourished, was funded by a waqf, along with caretakers’ wages, veterinary care and cat food. Edward William Lane (1801-1876), British Orientalist who resided in Cairo, described a cat garden originally endowed by the 13th-century Egyptian sultan Baibars, whose European contemporaries held a very different attitude towards cats, eating them or killing them under papal decrees.[2] Aside from protecting granaries and food stores from pests, cats were valued by the paper-based Arab-Islamicate cultures for preying on mice that destroyed books. For that reason, cats are often depicted in paintings alongside Islamic scholars and bibliophiles. The medieval Egyptian zoologist Al-Damiri (1344-1405) wrote that the first cat was created when God caused a lion to sneeze, after animals on Noah’s Ark complained of mice.[2]

Cat outside a mosque in Şirince, Turkey, with people praying in the background

In Islamic tradition, cats are admired for their cleanliness. They are thought to be ritually clean, unlike dogs, and are thus allowed to enter homes[2] and even mosques, including Masjid al-Haram. Food sampled by cats is considered halal and water from which cats have drunk is permitted for wudu.[2] Furthermore, there is a widespread belief among Muslims that cats seek out people who are praying.[1]

Muslim scholars are divided on the issue of neutering animals. Most, however, maintain that neutering cats is allowed “if there is some benefit in neutering the cat and if that will not cause its death”.[6] Muhammad ibn al Uthaymeen, a 20th-century Saudi Arabian Sunni imam, preached:

If there are too many cats and they are a nuisance, and if the operation will not harm them, then there is nothing wrong with it, because this is better than killing them after they have been created. But if the cats are ordinary cats and are not causing a nuisance, perhaps it is better to leave them alone to reproduce.[6]